Is Gaming Really a Sport?

From watching competitive players compete for massive prize pools to watching lets players on YouTube, gaming has become more than just about games. Perhaps the fastest growing off shoot of typical gaming is that of e-sports which has begun to attract millions of young people to watch and participate at the highest, most competitive level of professional gaming. No longer is gaming the solitary hobby of teenage boys, it has developed into its own thriving community of pro players and their massive followings which only seem to grow. By 2018, the gaming industry is expected to be worth $113 billion with 36.4 million gamers in the UK alone. But can video games ever really be considered a real sport?

Just like real sporting events, the stakes are high and the prizes massive. The largest e-sports prize pool to date amounted to a whopping $18,429,613.05 at the Dota 2 International Championship 2015. E-sports prize pools can trump even the largest traditional sporting events. For example, the Super Bowl 2015’s prize pool reached only 8.5 million dollars. Tournament prizes very often reach well into the hundreds of thousands or even millions for most e-sports events so it must be on the level of traditional sports in terms of finances. There are even trophies ostentatious enough to rival the Barclays Premier League Cup such as the Summoner’s Cup awarded to the League of Legends world champions.

So e-sports have the incentive and the gravitas of real sports in that sense. But how can a computer screen ever compare to a real gathering of fans in a stadium? Well, it isn’t uncommon for e-sports events to sell out entire football stadiums. In 2014 the Sang-am World Cup stadium was used to host the League of Legends World Finals. That’s an arena which houses 45,000 people and tickets were sold out faster than any typical sporting events. This was combined with online viewership which reached 32 million people on Twitch TV (a video game streaming site). E-sports have sold out events in stadiums from Wembley to the Staples Centre in LA and online viewership is always in the millions. With numbers like these, it’s clear to see these games are serious business. 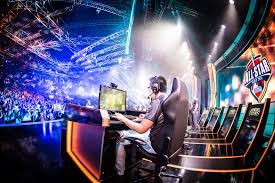 The main reason that so many people consider e-sports to be simply sports is because of the competitive nature surrounding professional gaming. Players are organised into real teams with coaches, jerseys and millions of fans. Pro players train constantly to perfect their skills, spending most of their working days playing to perfect strategies and skills. A pro gamer is expected not to treat gaming as a hobby but a full time job as they are expected to always be at the top of their game, just like professional athletes. They hold no other jobs and dedicate themselves entirely to the sport. When the time to compete comes it is done in a spectacular fashion with teams facing each other, attempting to climb the ladder, eliminate other groups and enter the finals to win. Traditionally, these tournaments are nail biting events with fans revelling in the glory of their teams winning and dealing with the emotion that comes with losing. Just like real sports, gaming is all about that competitive spirit of watching the best compete to be the best.

Gaming might seem at face value to hold no similarities to something like football but upon closer inspection the two are more alike than immediately apparent. Both are highly competitive, with massive tournaments and a huge crowd of fans ready to support. Even networks like ESPN are beginning to see the legitimacy of gaming as a sport, hosting e-sports events on their TV channels. Gaming is beginning to be considered a sport because of the competition it brings and the fans it holds.